Vancouver, British Columbia, October 19, 2020 – Red Lake Gold Inc. (CSE: RGLD)(FWB:P11)(“Red Lake Gold” or the "Corporation") is pleased to announce that its recently completed soil sampling program has identified MMI gold anomalies at its Whirlwind Jack Gold Project, the most prominent of which cluster within a magnetic low corridor along the LP Fault (see Figures 1 and 2, below).

“While early-stage, we are obviously very pleased that results from our inaugural soil sampling program have outlined a number of high-priority MMI gold anomalies that appear to situate along the LP Fault, a regionally-important structure that can be traced for more than 12km at our Whirlwind Jack Gold Project. As expressed by geophysics, the LP Fault corridor narrows while crossing-over the project border between ourselves and Great Bear Resources and then appears to swell and expand in size as we trace it along strike within the Whirlwind Jack Gold Project. Interestingly, the high-priority MMI gold anomalies identified by our inaugural survey start clustering together along the LP Fault around the point where the LP Fault corridor begins to widen within Whirlwind Jack, comprising a group located approximately half a kilometre to the west of our claim boundary with Great Bear. Our widely-spaced soil survey will require further sampling to follow-up and refine these MMI gold anomalies, and a larger more geographically expansive program given that our inaugural soil sampling program only scratched the surface of the project’s scale, with just 1.4 km of LP Fault strike-length at Whirlwind Jack sampled, a small portion of the much larger 12 km of LP Fault strike-length that the projects hosts (with work ongoing to identify further LP Fault strike-length based on a recently completed fall geophysical program). The identification of MMI gold anomalies along the LP Fault at Whirlwind Jack sets the stage for exciting times ahead as we work to systematically and methodologically explore the project,” stated Ryan Kalt, Chief Executive Officer of Red Lake Gold.

The Whirlwind Jack Gold Project is a district-scale gold exploration project covering more than 21,000 ha across 1,042 mining claims. The project is located adjacent to the 9,140 ha Dixie Gold Project being advanced by Great Bear Resources Ltd. 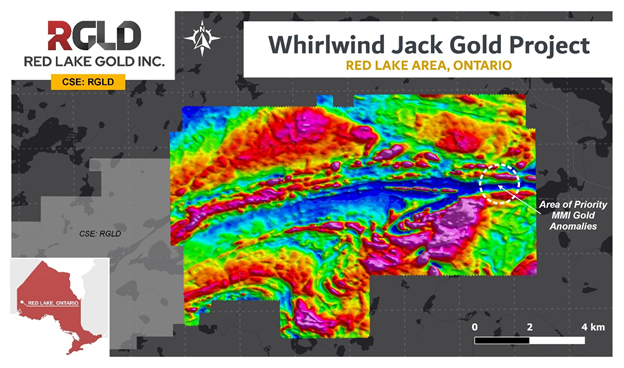 The phase one soil sampling program focused on an approximately 1.4km east-to-west by 1.25km north-to-south portion of the Whirlwind Jack Gold Project starting at the claim boundary with neighbouring Great Bear Resources Ltd., and delivered a total of 649 soil samples to the laboratory. 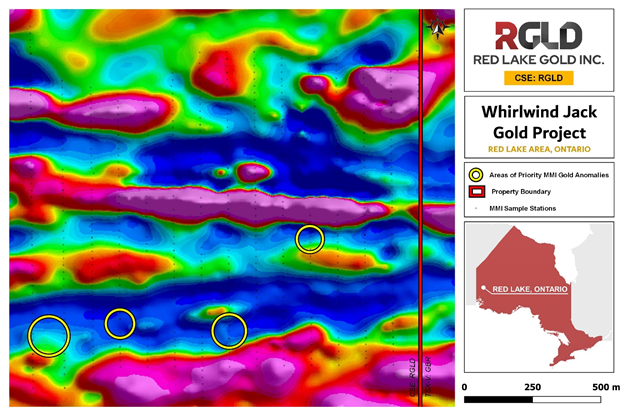 In response to the MMI soil sample results, Red Lake Gold has engaged Clark Exploration and Consulting Inc. to evaluate and plan additional exploration work, both in terms of follow-up and expansionary programs, details of which shall be provided in due course.

Mobile Metal Ion (MMI) geochemistry is a geochemical exploration technique. MMI measures metal ions that travel upwards from mineralization to unconsolidated surface materials such as soil, till, sand etc. Further information on MMI technology may be found at: https://www.sgs.ca/en/mining/exploration-services/geochemistry/mobile-metal-ions-mmi