“We are pleased to report that field exploration is underway at Red Lake Gold’s flagship gold exploration project, Whirlwind Jack. The community of Red Lake, for which our Company is named, recently experienced an evacuation due to a now-contained forest fire located north of Whirlwind Jack and we are relieved that the residents of Red Lake have been able to safely return with no major structural loss in town. As to today’s news, our large-scale phase one soil sampling program is an important exploration milestone for Red Lake Gold as we advance an exploration framework and methodology that has proven effective for the area. Our airborne program last year at Whirlwind Jack allowed us to demonstrate that Whirlwind Jack hosts at least 12km of the LP Fault structure, trending westward from the adjacent Great Bear Resources mineral claims. Although our field work this year was delayed by the COVID-19 pandemic, we have been able to leverage that extra time to further refine numerous target areas within the Whirlwind Jack Gold Project which we are excited to begin exploring. This intensive 750 sample phase one program will focus on a target grid defined by our geophysical work that commences at the claim boundary with Great Bear Resources. The field program will generate data along the LP Fault at the Whirlwind Jack Gold Project measured within the first 1.4km of its strike-length - out of at least 12km of strike-length confirmed by our field work in 2019 - with the project having the potential to both extend the LP Fault structure further west as well as explore numerous other target areas that have already been defined,” stated Ryan Kalt, Chief Executive Officer of Red Lake Gold.

The Metal Mobile Ion (MMI) geochemistry program now underway at the Whirlwind Jack Gold Program is being conducted within a priority target area situated adjacent to the claim boundary with Great Bear Resources Ltd. This first target area measures approximately 1.4km on an east-to-west basis and approximately 1.25km on a north-to-south basis. 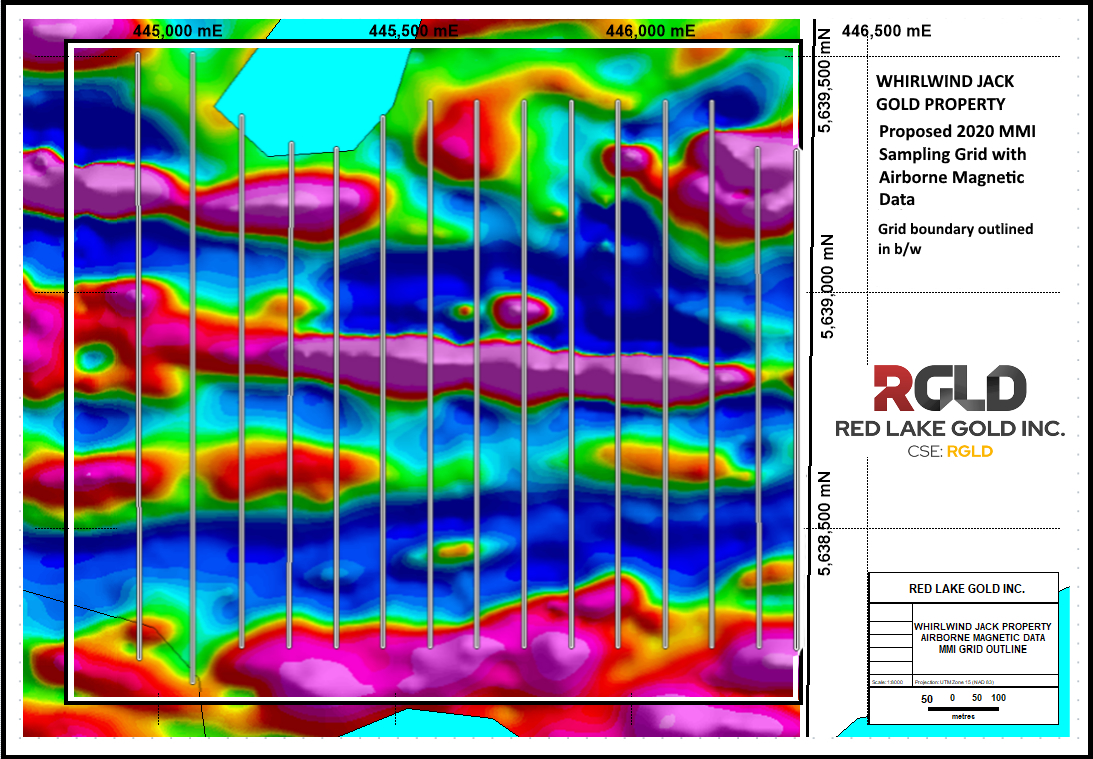 The phase one soil geochemical program is expected to sample approximately 750 different locations, with the subsequent data set designed to contribute towards vectoring potential drill targets. The Company retained Haveman Brothers Forestry Services Ltd. of Kakabeka Falls, Ontario to assist with performing the sample collection in a safe and logistically-responsible manner.

Red Lake Gold also wishes to disclose that multiple additional soil sampling target areas for future phases have also been identified within the Whirlwind Jack Gold Project. The Company remains attentive to building exploration targets across its project reflecting how, (a) the locale of potential mineralization may concentrate along the LP Fault with variation; and (b) recognizing that knowledge associated with various claim blocks in the region now believed to host the LP Fault were structured by person-defined claim boundaries that were set out without first having the 2019 discovery knowledge of the importance of the LP Fault structure and its notable gold endowment. Red Lake Gold believes its Whirlwind Jack Gold Project holds significant potential for exploration moving-forward.

Of importance, much of the Whirlwind Jack Gold Project, including the portion where the field program is now underway, was staked in August of 2018, which is relevant as the assemblage of the present-day Whirlwind Jack property preceded and predated the material discovery of gold within a new exploration target horizon – the “LP Fault” – as later discovered and announced by Great Bear Resources Ltd. in May of 2019 (see Great Bear Resources news release, Great Bear Drills New High Grade Gold Discovery at Dixie, dated May 28, 2019).

The Whirlwind Jack Gold Project, as now held by Red Lake Gold, has not before received a modern-day, large-scale and coordinated exploration focus informed by the exploration methodology and results since disclosed on claims at the adjacent project held by Great Bear Resources Ltd. The phase one MMI soil sampling program is a component of a significant future exploration work path that will test and explore the Whirlwind Jack Gold Project in a systematic, detailed and progressive manner while respecting the Company’s desire to maintain a prudent share capital structure.

Lab results from the phase one exploration program discussed in this news release are expected in late-September.

Further information on the Whirlwind Jack Gold Program may be found at:

The Corporation cautions that results or discoveries on adjacent properties (i.e. Dixie) may not necessarily be indicative as to the presence of mineralization on the Corporation's property (i.e. Whirlwind Jack).