“Among other features, the Fenelon North project has substantial coverage of the Jeremie Pluton which is an intrusive structure that has recently come to be understood as increasingly important to gold mineralization discovered in the area (see recent news releases and public disclosures by Great Thunder Gold and Wallbridge Mining). As reference, the Northbound project recently announced by Great Thunder Gold is located entirely within the Jeremie Pluton.

Fenelon North provides RGLD shareholders with ownership of a large-scale tenure position in an emerging exploration hot spot while achieving that prospective upside in a very low-risk and highly accretive manner.

As a result of the transaction announced today, stockholders of Red Lake Gold stand to directly benefit from geological developments that may result from a broadening of exploration in the Fenelon area,” stated Ryan Kalt, Chairman and Chief Executive Officer of Red Lake Gold.

The Fenelon North Gold Project is comprised of two primary claim blocks, one situated approximately 1km west of the claim boundary of Great Thunder Gold’s Northbound project and the other situated approximately 2.5km northeast of the claim boundary of Wallbridge Mining’s Fenelon project. The project is also contiguous to tenure held by Balmoral Resources Ltd. 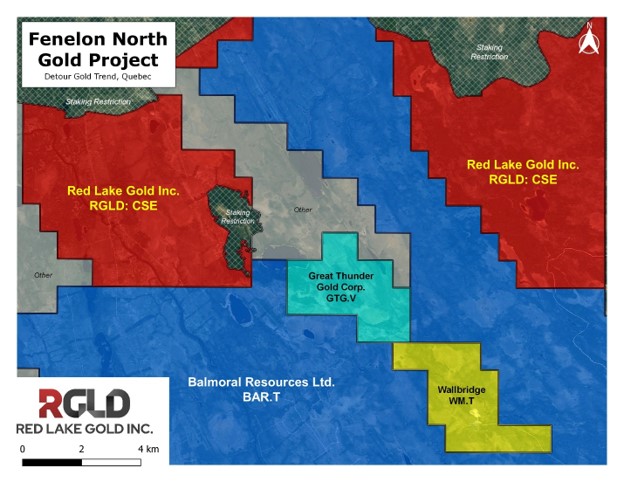 A map of regional geology associated with the Fenelon North Gold Project can be found at:

The Fenelon North Gold Project was acquired for nominal consideration. A pre-existing two percent royalty on the claims was assumed by the Corporation.

Toby Hughes, P.Geo., is the Qualified Person as defined in Canadian National Instrument 43-101, who has reviewed and is responsible for the technical information presented in this news release.

On Behalf of the Board of Directors
Ryan Kalt
Chairman & Chief Executive Officer
Email: info@redlakegold.ca